The following post contains spoilers for Supermassive Games’ Until Dawn. While not all parts cover specific story points, going into this game blind about the nature of the mechanics will probably make the experience more enjoyable.

I’ll start with a disclosure: I really love ‘interactive story’ games. People have often been heavy on the criticism for David Cage’s work with Quantic Dream, but I loved Heavy Rain and Beyond: Two Souls. So I went in to Until Dawn as one of the most receptive customers.

I was warned at the beginning of the game that my decisions had consequences, and that I could kill the characters in any combination, and that I could finish the game with everyone dead. I approached the game with a cautious demeanour following this warning. Treating every QTE (Quick Time Event) as a life or death scenario, gently pacing through the various creepy corridors and forests with caution in case I stumbled across an important moment that I would need to react to. I scoured the environment for clues and totems, hoping that I could make the most of them to solve the mystery around.

I was fully invested in the game and the story, even ignoring aspects that bother me even within films of this genre (like people sneakily following others with torches, as the light would be super bloody obvious in the otherwise pitch blackness), and when I got to the end I felt pretty content with what I had done. I enjoyed the experience, the tension and the scares, and even though some people died due to stupid mistakes by me, I acknowledged the ending for what it was.

Seeing how all of my butterfly effects fluttered through my story was quite interesting. Small acts rippled through in odd and interesting ways. Some oddly inconsequential acts at the time had relatively important effects on the story. Choosing to give the flare away lead to confrontation that may have not occurred without that choice. But the ‘may have not‘ is important because the ramifications of our actions don’t seem to be as significant as we were lead to believe.

No matter your actions, the story progresses in a relatively similar manner right up until the end. The same places will be visited, by more or less the same people, to make more or less the same conclusions. Your autonomy is surprisingly restricted given the constant rhetoric about how your choices matter. The game has an opening sequence showing the veins of a butterfly’s wing, telling us that our actions will change the course of the game. A scene between Chris and Sam continues to beat you over the head with the concept of the butterfly effect by telling us how Chris and Josh met, and how without that small act someone entirely different could be sitting where Chris was (which in my playthrough, may have been better for Chris…). The game tries to set this as a narrative and a reality for the game universe, but what we actually have is a story with a few terminal points, but a mostly forgiving meander of tension. Going back with this knowledge poses a threat to the replayability, and to the potential of a truly consequential game. 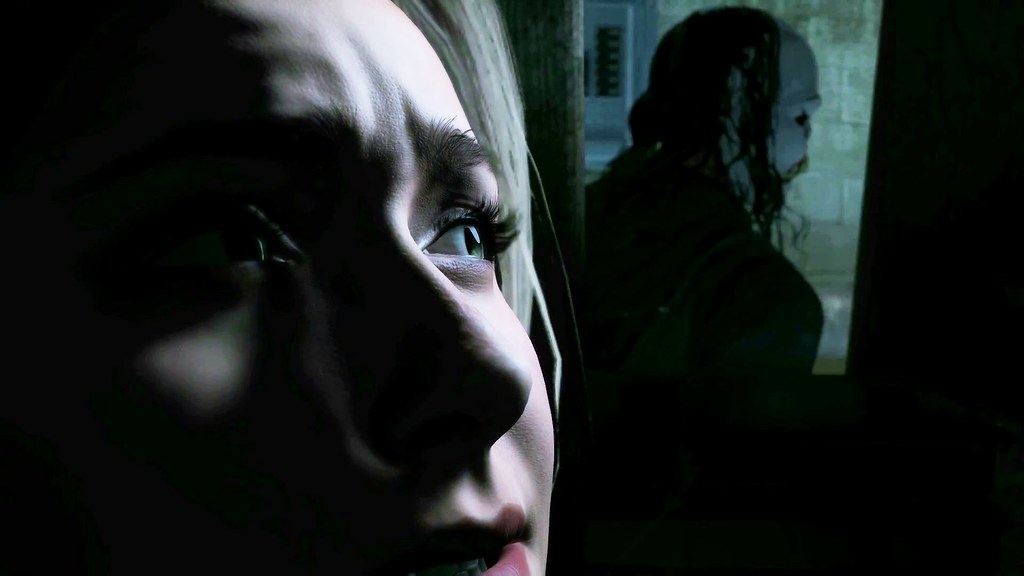 An extraordinarily tense encounter in your first playthrough

After completing the game you can look up the Trophy list, and see that there are only a few highly significant moments that will change the direction of the game. You can look up all the death scenes, and see that there are surprisingly few possibilities. One character only has a single death scene. Knowing that can really dampen the experience on a replay, as you begin to see how your actions really don’t add up to much. Obviously, some choices are bigger than others, with some having very surprising revelations (e.g. Ashley Snaps) but most actions only make small changes.

In one of the earlier chapters you are left as Sam to escape from the Psycho. In an initial playthrough, with no idea of what is actually going on this is a moment of genuine terror. Rapidly trying to successfully navigate all the QTEs, and make all the right choices with what to do next, only to make a victorious escape… or you screw up and get captured, to free yourself or freed later on. The actual choices you make don’t matter because the game needs to get through to the other side of that chapter. Knowing this can really sap the tension from a scene.

By limiting the autonomy of a player Until Dawn actually diminishes it’s replayability. I am going to replay the game, but rather than to explore all the different things I can do, mine will be focused on getting the ‘ending I wanted, not the one I got‘ and on getting various Trophies. I do look forward to going through the game with other people, and seeing how everyone reacts, but from a persona; experience, I’ve seen what there is to see.

Until Dawn was a fantastic experience, and kept me glued to my screen until the wee hours of the morning creeping myself out as Silent Hill-style fog rolled in on my apartment, but it is one that I can’t help feel missed that little bit more autonomy. That little extra could have turned it from a thoroughly great experience, to one that would have truly been paradigm shifting.